“My love of locomotives and trains started when I was a very young boy living in England. Walking to school, I would stand on a bridge over the line that took the famous Golden Arrow Express from London to Dover each day.  Something in that scene triggered a love for trains that has stayed with me ever since.” 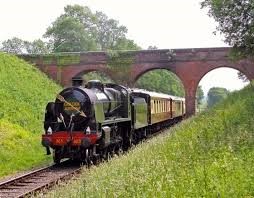 More than sixty years later, Nigel Randall fondly recalls many memorable encounters with steam locomotives.  “My family moved to the Copperbelt in Northern Rhodesia (now Zambia).  The steam trains carried the copper from the mines to the coast and I spent hours watching them and getting to know the drivers.   On one occasion, I was invited to sit in the cab and actually drive it, a thrill for a teenager.”

Many years later, Nigel joined ‘Friends of the Rail’ in Pretoria, a club dedicated to preserving the beautiful steam engines that were disappearing as diesel and electricity replaced steam on the railway lines criss-crossing the country.  “These old locomotives were brilliant pieces of engineering, precision made, crafted with love and beautiful to look at.  They were being turned into big pieces of scrap metal.  Steam Preservation Clubs are run by enthusiasts who spare no personal cost in restoring, preserving and running these engines.  Thousands were brought into South Africa over the years but just a handful remain,” he explains.

Nigel’s love of steam engines went wider than locomotives.  A friend took him to a mine at Cullinan, where they found two triple expansion steam engines that pumped water to the Cullinan Mine.  “They were made by the same company that built the engines that drove the Titanic.  It’s true to say that we will never see such huge steam engines again.  Technology has moved on.”

As a member of “Friends of the Rail”, Nigel was active in the use of steam-hauled trips to Cullinan, Pyramid and

around Pretoria; the difficulty here was being limited to the use of low priority lines for this purpose.  “”Today there is a resurgence of interest in steam preservation across the country and operating with tourism initiatives in mind improving.”

Nigel lists a few that are well worth trying.  “Reef Steamers run trains from Germiston to Magaliesberg and Irene on day trips.  Another one I have tried is Payton’s County Railroad, a brilliant community-driven tourism initiative in Creighton, KwaZulu Natal.  There’s also fine rail experience to be had in the Western Cape.  The Ceres Railway Company runs both oil- and coal-burning trains from Ceres to Cape Town harbour and back.  The famous Outiniqua Choo Choo from George to Knysna is currently being accessed for possible revival – a long-term project but, for enthusiasts, an exciting development. There are still

many other excellent examples for people to enjoy such as Atlantic Rail in Cape Town and Sandstone Estates narrow gauge near Fiksburg in the Free State.”

Nigel is relaxed about the situation.  “I am happy that there are enough people with the love, passion and means to keep these beautiful machines working.  My message is this: why not investigate one of these trips?  Not only will it be a great ride into the countryside, but you will also appreciate the beauty of one of the great engineering marvels of the nineteenth century.  And by so doing, you will contribute to their continued viability.”