Nepal – Saving the Best for Last!

Logically, destination Nepal should have followed on after leaving India, but having communicated with a local Kathmandu tour operator, still from home, I was told that June is not the best of months to visit and trek, unless of course I wanted to venture into the Trans-Himalayan Mustang. He had given me the itinerary of a very tempting 21 day tour into that area, but at 3000US$ my shoe-string budget did not allow for such extravagance.

Oh well, I had no intention of slopping around in the monsoon rains, so struck Nepal off my bucket-list for the moment. Then, as providence would have it, I decided to extend my adventure by a further month or so, and being blown away by photos taken by my young travel companion Horacio, while he was in this country, Nepal became the natural conclusion to my travels, before finally heading home again.

Even after nearly 8 months of travelling, where you might think not much can phase me
anymore, the thought of arriving at Kathmandu airport after dark did seem a tad daunting, especially when one of the travel blogs I read made the arrivals procedure seem quite nerve-racking. But then again, it was written 2 years ago, and even at a backwater airport like Kathmandu immigration procedures have improved by leaps and bounds.

My very first impression of Kathmandu and Nepal was of extreme friendliness and helpfulness. With the first Namaste I immediately started relaxing. My Air Asia flight from Kuala Lumpur was not very full, so it meant that queues were acceptable. Instead of having to fill in a visa application form there were a few state of the art scanning machines into which you fed the main page of your passport, and then had to enter a few particulars like length of stay and an address in Nepal, e-mail address on a touch screen, and with the press of the Enter button you were issued a receipt with which you then joined a queue where you paid the relevant visa fee for your length of stay in any major foreign currency (I paid 40US$ for a 30 day visa) and then joined the 30 day queue that issued the actual visa. No longer the need to produce a passport picture, as they had it via the scanned passport page. All very nifty, I thought!! All in all I was out of there in a matter of less than an hour. By that stage my luggage had probably gone around the conveyer belt a few times.

I had sent an e-mail to the hotel I had booked a room at to request transport from the airport, so as to avoid running the gauntlet of touts at the exit, and although I had not received a confirmation, sure enough my little taxi was there and waiting. I had befriended a young Spaniard, Oliver, in the arrivals hall who shared the transport into downtown Thamel, which was a bonus. The official taxi counter charges 700 Nepali Rupees for a trip (that’s roughly 80ZAR) which was what the hotel also charged me, and I assume you probably could have bartered a reduced fee on the streets but was it worth the bother?

On the trip into town Oliver told me about having completed a 30 day/900+ km Camino de Santiago pilgrimage in June, so guess what has just been added to Syb’s Bucketlist??
Thamel is the heart of Backbacker/Trekker Heaven, and it was heaving when we scooted through the narrow lanes to get to my hotel. Even though this was after 9 pm at night. The energy in this town was palpable, and even on the first night here I knew I was going to love this place.

Ambling through the dusty streets of Thamel the following day, you could see that tourism contributes a huge percentage to the Nepali economy, and that trekking and any activity relating to the Himalayas must be the biggest draw card.

Every second shop offers “genuine” North Face, Merrill, Mammut, Salamon, Jack Wolfskin backpacks, down jackets, sleeping bags, hiking boots replicas of differing quality and then locally knitted socks, scarves, hats and gloves and then of course any other tourist paraphernalia that makes any hardcore shopper’s heart skip, but besides buying a water bottle, new socks and a quick drying towel (which I hate!) I managed to contain myself.
Once past all the shops I also managed to see lots of other wonderful parts of Kathmandu. 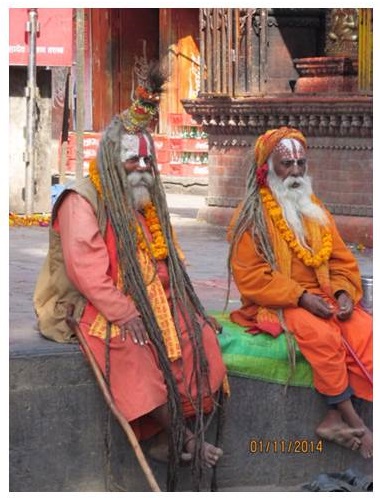 Contrary to what I thought, Nepal is in fact mainly Hindu.

One of the main reasons I had chosen The Trekkers Home as my hotel of choice in Kathmandu was because of the glowing reports that I had read in my bible, Trip Advisor, about Dip(endra) the young (27!!) owner/manager of the establishment, and let me tell you, he did not disappoint!! With the enthusiasm of a true entrepreneur and professional he planned and arranged the next 11 days of my Nepal adventure. Here’s his itinerary:Transport (plus lunch) in a tourist bus to Pokhara – the starting point,of all treks into the Annapurna district.

And all this for the princely sum of the equivalent of 580US$! Now you try and do better than that!

Have to quickly share a memorable evening at the Rum Doodle Restaurant with my readers.
Rum Doodle is the fictitious 40 000 and 1/2 foot highest mountain in the world of a little humorous novella “The Ascent of Rum Doodle” written by an English author, W.E. Bowman in the 1950s.

The restaurant named after said mountain is frequented by any trekker/mountaineer worth his/her oats and to commemorate the trek you are given a foot to sign which is then hung from the ceiling in honour of your endevours.

There is a huge wall with signatures of all the Everest summiteers, even the great Sir Ed is immortalized, and as I was on my own that evening I had a chance to study many a signature and I stand in awe of this ultimate of mountaineering achievements! I on the other hand was not going to attempt anything quite so bold, so decided to head to the beautiful lakeside town of Pokhara from which most treks into the Annapurna Range of the Himalayas begin.

The 5 day loop that I was going on seemed to be the most popular route and although I was trekking solo with my young guide Ram I was by no means ever on my own, and there was a constant stream of fellow Trekkers to chat to and exchange the usual mountain banter. There were folk from all parts of the world and what I found so refreshing was that at least half of them were of a similar age to me. There were teahouses dotted all along the mountain paths and the villages have expanded tremendously over the years to offer basic accommodation to this ever growing onslaught of tourists. We passed scores of porters carrying not only heavy packs for the long term trekkers to Annapurna Base Camp but provisions to these inaccessible and remote settlements. 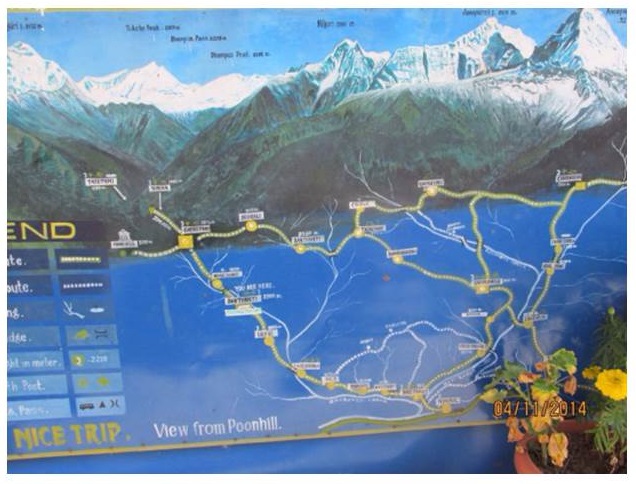 On day 3 we rose before it got light, donned jackets, gloves and headlamps and headed up to the 3200 meter Poon Hill (yes, in Nepal 3200m is considered a hill!) to experience sunrise over the Annapurna Range. It was achingly beautiful and my little point-and-shoot will never do this splendor any justice.

Day 4 was probably the most difficult for me, mainly because it was unrelenting downhill all the way, and bless Ram, my guide, who held my hand every step of the way and steadied me and made sure I came to no harm. Thank you, my young friend! 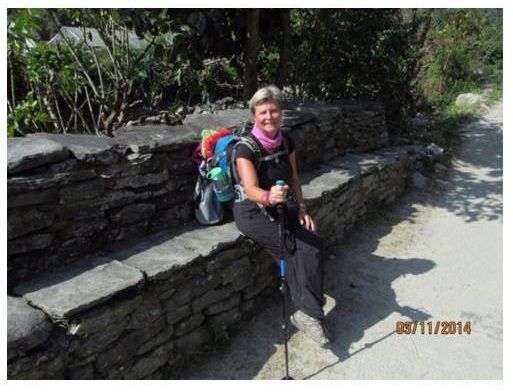 I felt quite heartsore having to say farewell to Ram after spending 5 days in his gentle company, and he is a fine example of the warm and friendly Nepalese that I have so far encountered. They have surely contributed to making this my favourite destination.
Namaste!!