Giving back on a Greek beach

Written by Clients in Action on December 14, 2018. Posted in Give Back.

Giving back on a Greek beach

The Ketleys continue to recount their adventure as volunteers for turtle conservation in Greece – proving that giving back can be both fun and rewarding.

Each nest is carefully identified with a beach sector code, a unique number and date of discovery, or laying if an earlier team had observed a laying turtle (she would be tagged and measured). Sometimes a nest is discovered by predation (by stray dogs or foxes), but in every case the nest is protected with a metal grid and anchored by bamboo stakes or flat stones. A “do not disturb” warning sign in three languages is placed at the nest, with the necessary identification information.

On our first day on the beach, we immediately saw a number of nests … and, with dismay, the many (illegal) summer beach bars (one named Caribbean Bar!) right on the beach with semi-permanent grass umbrellas and sun beds – right amongst the turtle nests, competing for beach space. The fear is that these bars contribute to light pollution and so prevent turtles from laying or lead to the disorientation of the hatchlings. Beach goers had also constructed less permanent bamboo dwellings of their own, and there was evidence too of beach fires – all potentially obstructing a hatchling’s dash for the sea! Our task was to photograph (surreptitiously) all these obstructions and count the umbrellas and sun beds for reporting to the authorities. In addition, we would come across vehicular tracks on the beach, again with the potential to carelessly destroy established nests. We were warned not to antagonise beach-bar owners or their patrons in fear of deliberate destruction of nets or nesting sites in retaliation – a delicate balancing act, complicated somewhat by the language barrier.

Safeguarding survival of a species

If we came across hatchling tracks, we recorded this, and then swept the tracks away in case there was a further hatching the next night to be added to the tally. Sometimes we came across a “mass hatching” – a nest’s first hatching of 20 or more babies – and, if even luckier, we would witness a hatching and then ensure that the baby turtles made it safely to the water’s edge. It was important not to handle the hatchlings – they had to exercise their flippers and have time for their in-built GPS systems to register their whereabouts. If a hatchling showed signs of disorientation, we could dig a shallow trench to the sea for it to follow … a necessary human intervention. Hatchlings showing signs of stress or fatigue were reburied, and the place marked with a bamboo stake.

It being the end of the season, our main task was excavating “expired” nests: carefully

Locating the nest’s egg chamber by removing the protective grid and scraping away the surface sand, then digging down into the nest proper to remove all the eggs. On occasion we found live hatchlings, later to be “escorted” to the sea. All hatched eggs are counted and recorded, and unhatched eggs broken open and examined to see if embryos existed, or if there was no evidence of fertilisation, and then total clutch size recorded.

My most successful nest was 125 hatched eggs, but the record (held for two successive weeks) was held by the American volunteer: 133 hatched eggs – a remarkable outcome.  Initially, our tasks were quite gruelling, not the 5km walk, but more the regular getting down and up off the soft sand while excavating nests. I developed a “prayer mat” to protect my knees from the rough sand paper! It got better as the days progressed, and I’m proud to say that we never slowed any of the teams down, and completed the tasks assigned to us … perhaps to the surprise of our much younger colleagues! While on beach surveys we engaged with local and foreign visitors (mainly from Germany, Austria and France), many very interested in what we were doing – in some cases, they gladly offered to assist with shepherding hatchlings to the water’s edge.

Such were our tasks for the two weeks – with a visit over the intervening weekend to the local historic town of Kyparissia. We had great fun with literally hands-on work with one of the most endangered species in the Mediterranean, living in a quiet area near a traditional fishing town. With the thrill of watching the hatchlings head for the sea, we knew that, if we were not able to make a difference in the two weeks, we certainly made a lasting one-off contribution to the preservation of endangered turtles and the wonder of God’s creation!

GVI – from which can be found projects in South Africa – wildlife conservation, including Elephant research in Limpopo.

If you missed the beginning of this account of the Ketley’s Greek adventure, click on the article below: A family vacation gives birth to a passion for conservation

When Louise and Roger Ketley returned from a series of family scuba diving and snorkelling holidays at Rocktail Bay in northern Maputaland (KZN), it was with more than fond memories!

And for Roger’s Record of Turtle facts, click on the article below: 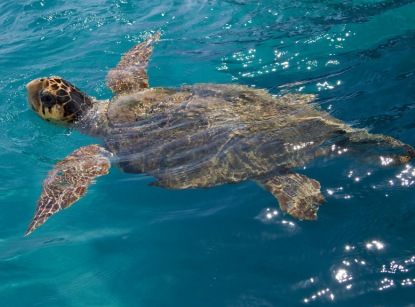 Here are some fascinating facts about these endangered creatures.