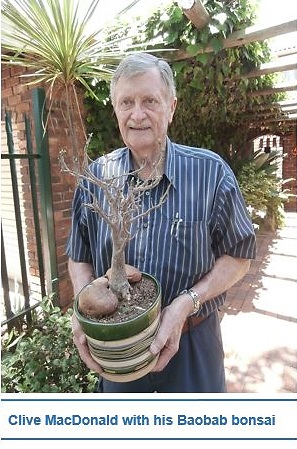 “We named our first bonsai tree Baby.  We got her in 1997 when she was already eleven years old, which makes her over thirty now.”  Clive MacDonald points to a small pot standing in the sun in his small garden.  In it grows a tiny baobab tree, no more than forty centimetres tall.  With its bulky, strangely-shaped stem and uneven, root-like branches, it is quite obviously a miniature version of the classic trees that can be seen in the hot, arid conditions of the northern Kruger, Zimbabwe and Botswana.

How did the love affair between tiny baobab trees and the MacDonalds, Clive and Margaret, begin?

“In the 1980s we spent many happy holidays at Kariba in Zimbabwe, where we visited a sanctuary that rescued elephants that had survived the regular culls that took place at that time. We got to know the elephants so well that they even recognised our voices when we returned each year.  One year, after having seen on television how a local woman, Marge Pope, grew baobab bonsai from seed, we decided to visit her on our next trip.  We were captivated and bought Baby there and then,” explains Clive.

Since then, the MacDonald’s bonsai hobby has grown in size and sophistication.  Whereas Baby was bought as an existing tree, Clive now grows his own trees from seed.  “We bought a few more tress from Marge, including Danger, our second tree.  Now I have perfected the art of growing them from actual baobab seeds, which are found inside the pods that the tree produces, which are also famous for another ingredient, cream of tartar.”

Growing a successful baobab from seed is technically difficult.  To simulate the natural environment, a seed is implanted in actual elephant dung, which is then placed in a pot.  “That is how the trees grow in the wild,” explains Clive.  “The elephants eat the pods and the seeds 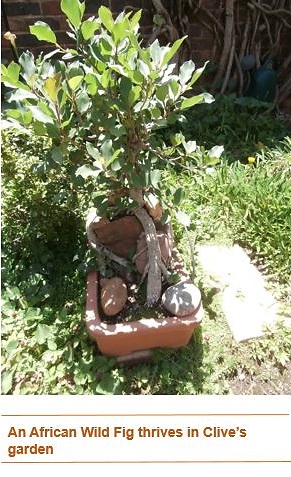 germinate in their digestive tracts.  In my pots, they require a high environmental temperature, perfect consistency in their sandy soil and just the right amount of water.  Anything out of range and the tree dies.  Keeping them small is also an art.  I have to keep trimming down the
single tap-root to stunt the tree’s growth.  The size of the pot is important here.  The branches and leaves also have to be pruned correctly.”

Each tree is individually named and has its life story recorded in a journal.  “That way I can track how they develop and modify my technique.  Really, these little trees are like my family,” he says, like any proud dad.

Recently, Clive has grown other bonsai species.  “I now grow miniature African Wild Fig plants, which are totally different to baobabs.  I have developed a greenhouse made out of sawn-off two litre plastic Coke bottles to keep the environment perfect.  I have also learned how to grow them on rocks, which is where they are found in nature.”

The love, dedication, skill and years of perseverance have paid off for Clive.  “Our retirement years have been made so much richer by growing these little trees.  Each one is different and special, rather like having new children in the house.  Only quieter.”