Can you handle the waves against your boat?

Before humanity understood how the climate and the weather worked, the damage to their homes, livestock or crops caused by storms and floods was taken very personally and seen as punishment from an angry god or gods.

Naturally not wanting to further upset an already angry god, people would expend much time, effort and energy making sure that their god was made happy again. This led to all sorts of complicated rituals thought to make the relevant god happy.

As climate and weather patterns came to be understood, we started to realise that the storms and floods we experienced weren’t aimed at us personally. They were just natural phenomena that occurred through the course of life.

While we’ve come to understand this about the natural weather patterns, we have unfortunately not yet learnt that 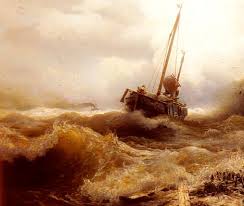 If you’re alive and living on planet Earth, you’re sailing on the seas of life. On your voyage, you’re going to encounter storms, tides, currents, wind and waves. They’re all just a natural part of life.

Unfortunately, we categorise everything that happens to us in life according to our own perspective. We therefore view events that occur as either good or bad when in fact they are neither good nor bad. They are just events which happen to us like waves knocking against the side of a boat that is sailing at sea.

Why would you want to get angry with the waves knocking against your boat? They’re just there. They’re there for everyone and nothing they do, like causing your boat to rock, knocking you slightly off course, is done with a personal intent.

So when things don’t go exactly as you want, when little things happen to rock your boat or bump you slightly off course, don’t get upset and take it personally and feel someone is out to get you. No-one is. They’re just waves knocking against your boat on the sea of life.

If you need to take any action, like steadying the boat and stopping the rocking, or adjusting your course, slowing down or speeding up, do what you need to do, but don’t let it get under your skin and upset you.

Imagine if a ship’s captain became emotional when the boat he was steering is buffeted by waves. Of course he wouldn’t. He would take it all in his stride because he knows that’s what happens at sea.

You have to make sure, though, that what you think are just waves are, in fact, not consequences of bad decisions you’ve made. If they are, it’s up to you to do something to correct things. Blaming someone or something else won’t change things. Only by taking responsibility for your actions can you face the challenge and do something to correct it.

If, however, after examining what’s happened, you realise that it’s not because of anything you’ve said or done, don’t allow yourself to lose any sleep. Recognise the waves knocking against the boat and just deal with them.

Once you start to recognise the waves against your boat, and once you realise that there’s nothing personal about them, you start to move more into a stress-free zone because you don’t expend energy and emotion getting upset by what you think are events directed personally at you. You then just ignore them or take them in your stride.

Leaders who understand how to deal with the waves against their boats both in their personal and professional capacities are far more productive, inspiring and effective!

Alan Hosking is the publisher of HR Future magazine, www.hrfuture.net, @HRFuturemag, and assists executives to prevent, reverse and delay ageing, and achieve self-mastery.