Written by Clients in Action on May 19, 2017. Posted in Relationships. 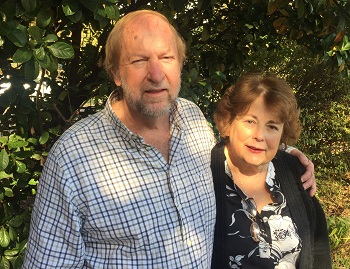 Chartered Wealth Solutions client, Michael Hennessy shares how his own relationship with his wife Jenny inspired the couple to help others appreciate the value of resilient relationships.

Many years ago, I was retrenched from my employer from what I had felt was a happy and reasonably successful career of just under 20 years. This was all rather shocking and a severe blow to self-confidence and esteem.

Throughout this time, my wife, Jenny, was a tower of strength and support. “What are you so worried about? Where is your faith? We will live”. And she was right.

I eventually set up my own little consultancy, did not become a millionaire but had a lot of fun. New doors opened and I found a new respect from my peers.

Exactly on our 30th wedding anniversary, I went into what was then for us all a very strange fit. After investigation by the neurologists, I was diagnosed with a brain tumour which was fortunately benign. However, the brain scarring from its removal had caused epilepsy and sort of scrambled my word and number ability, and words is what I do. (I asked the neurosurgeon why it could not be in that part of the brain that deals with mowing the lawn or doing dishwashing;  or even staring at sexy girls. I had no sympathy. Still, although my brain remained a little fried, at least I could continue to stare at pretty girls!)

Again, Jenny was my guardian angel. All the while the doctors were trying to get my epilepsy under control, I was not allowed to drive and she fetched and carried me everywhere. And cheered me up when I was depressed (which was often).

What a person. What an example of love in action. We have always been fortunate that we do have open channels of communication. I just hope that anyone going through similar trials has the advantage I had of resolute loving support, but the problem is that for many people embarking on a journey of married life, there is little appreciation that marriage can be tough.

Jenny and I are part of a marriage preparation exercise which is called Engaged Encounter. Engaged couples attend a weekend away (and it is important to get totally away, no distractions, just you and your fiance).

There is a presenting team made up of an older couple, a younger couple and a priest who is there for spiritual support and also to share his own experiences. Each couple talks, for 30 minutes or so, about various aspects of married life, such as:

Then the couples go off by themselves and talk about the issues raised. Often, amazingly, this is the first time they have confronted some of these issues. It is generally a truly magical weekend and the couples usually say how eye opening it has been. I wish we could get to all young people preparing for marriage.

If anyone knows of any young engaged couple who may be interested in the programme, they can find information at ctinfo@engagedencounter.co.za. Although it is called Catholic Engaged Encounter, it is not restricted to Catholics, or indeed to Christians. Should you also wish to volunteer as a mentoring couple, you can do so via the same contact.