Written by Clients in Action on September 8, 2014. Posted in Play. Leave a Comment

Following Sybille on her travels

And so my 3 weeks in Laos are coming to an end. I have just reserved my seat on the sleeper bus from Luang Prabang to Vinh on the Vietnamese coast, which will be another epic journey of 18 hours +. Experience has taught me that during the rainy season you are wise to add on a few hours to your travels, and be grateful if you survive the trip without major breakdowns or hold-ups.

The same evening I arrived tired and emotional at Don Det Bungalows a tough young Swiss girl had walked past determined to get to her booked accommodation +/- 3 km further south at the tip of the island. Now you must remember, it was pitch dark, drizzling and the path was one mud bath!! Ani, the proprietress of the establishment finally managed to convince the lass that it was sheer madness to carry on, and Jill eventually capitulated and decided to seek shelter here. And with that I had found a travel buddy for the rest of my adventure through this amazing country.

The following day Jill rented a bicycle to get to her original accommodation and explain what had happened and rode through a puddle which was deeper than she thought and ended up submerged in the mud, barely managing to save her heavy carry-on from disaster. She had to shower three times before the green dye from her recently purchased pants was scrubbed off her legs. So, cycling is not such a good idea during monsoon rains! But what is impressive is to explore the myriad of waterfalls around the 4000 Islands.  Khone Phapheng Waterfalls are supposedly the largest in South East Asia by sheer volume and I can believe this. 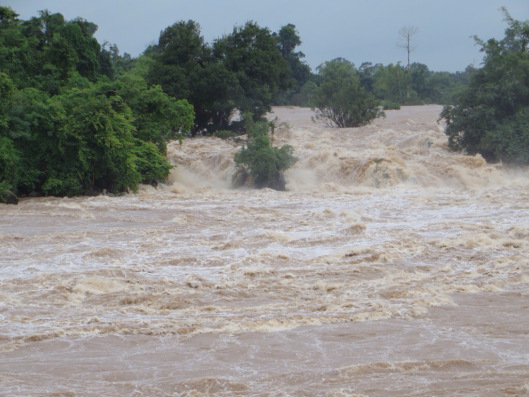 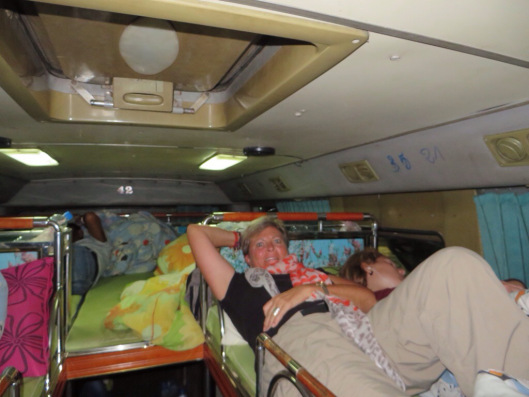 Written by Clients in Action on July 1, 2014. Posted in Purpose. Leave a Comment

When a three-year old girl was taught to swim by her cousin in their fishpond, she could not know that she would be swimming in an 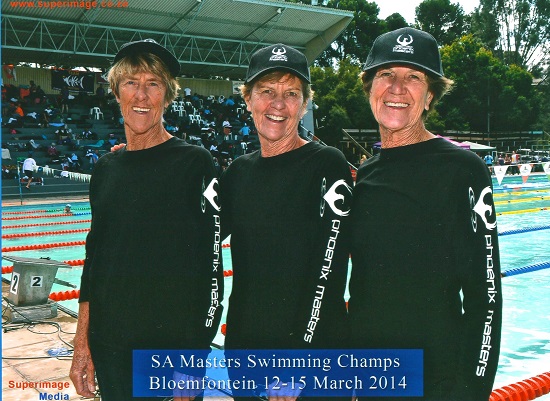 international Masters competition at the age of 75!

Right: Sisters, Anne, Jane and Sue (neé Roberts) are competing at the World Masters Swimming Championships in Montreal this month.

A local family – the Roberts sisters: Sue, Jane and Anne – competed against the world’s best in their age group in the World Masters Swimming Championships in Montreal, Canada in August – appropriately, the month in which we celebrate women in South Africa.

How did this amazing trio of siblings come to achieve this astounding feat?

Sue Leuner (nee Roberts), fell in love with swimming following her lessons in the fishpond, and was spotted by a coach at a school interhigh gala at the age of 14.  This led to her competing in the Olympics in Melbourne Australia in 1956 at the age of 17, and the Commonwealth Games in Cardiff, Wales in 1958.  Sue recalls the rigorous training she underwent:  “The family went on their December holiday and I stayed behind to train at the Hillbrow swimming pool.  We had a coach and trained twice a day – in many ways, we were ahead of the trend that was just taking hold of the world.” 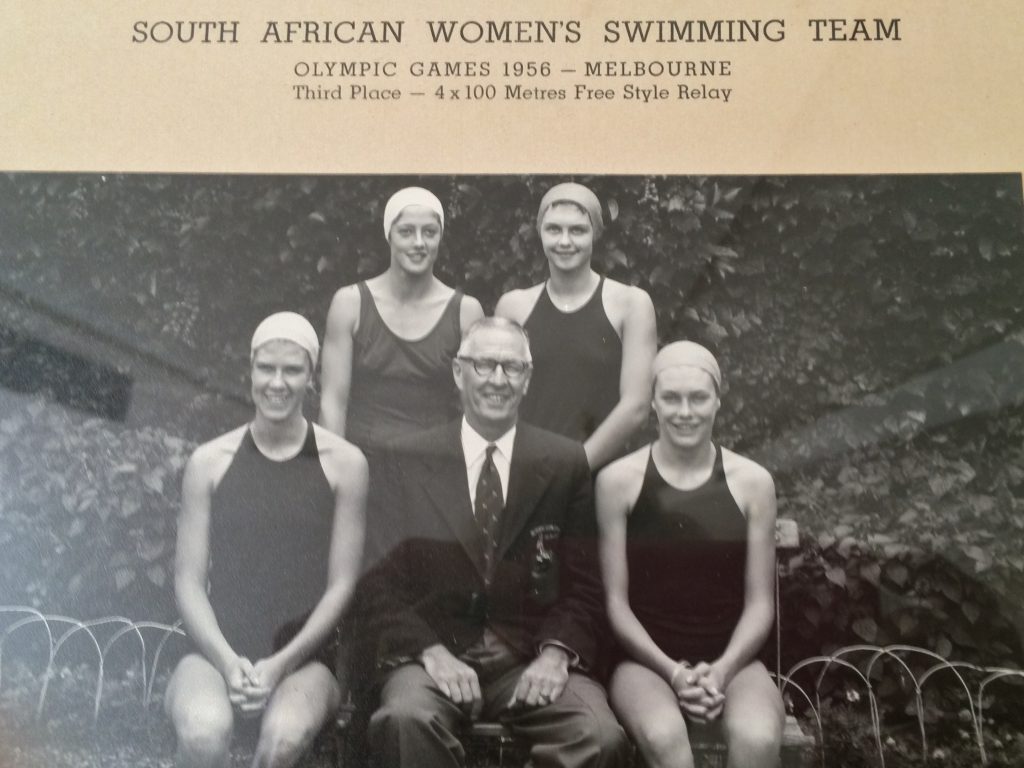 Then, for some years, Sue allowed her swimming talent to lie dormant, despite having achieved her Springbok colours.  Life was full – she was studying at the University of Cape Town, majoring in Social Science in the absence of the availability of her first choice: physiotherapy.  She also found Personnel Management appealing, and discovered that Harvard Business School offered a general course in business administration on their Radcliffe campus in Boston – a one-year programme for women  who, at that time, were excluded from attending the business school.

“Despite having relinquished my swimming career, I was quite envious of my friends who had been involved in something like tennis or hockey – that enabled them to continue enjoying their sport long after we’d given up rather boring training.” she says.

A change came about when, in 1994 Sue’s sister, Anne, participated in the world masters swimming championships and urged Sue to go with her to the Pan American Games in Hawaii the next year.  Sue decided to join her in her training regime –they swam in the sea, the lagoon, the pool. But then the Games were cancelled.   Sue was told, “Don’t worry … come to Nelspruit for the SA champs instead!”   What a disappointment – but by that time she was hooked and had her first masters experience.

“I knew then that this was my element, something that just came naturally to me,” she says.

The two sisters went on to compete in the world championships in 1996 in Sheffield,and in Munich in 2000, but that marked the end of Sue’s swimming for that time. Two years ago, Anne (then 66 years of age) started a swimming school at Roedean School in Houghton to train the learners – she started 5:00 and 7:00 classes for the parents, on either side of the 6:00 lesson for the children.  “I joined the 5:00 class and fell in love with swimming again – there is nothing like the feeling of the early morning: the sunrise, with the sound of the birds, and the feel of the warm water,” says Sue.

“When my husband, Rupert, asked what we were doing all this training for, and offered to send us to the international competition which was two years hence, we laughed.  But, with time, the idea grabbed us and about a year ago we established contact with an e-coach in Pretoria, Annemarie Dressler, who sends us schedules by email, and who will be accompanying us to the world championships.”

Annemarie keeps the Roberts ladies exercising: two days of gym and three days of swimming each week.  Annemarie herself is an inspiration, having contracted cancer some years ago, and, determined to be well again, she revolutionised her life by learning about nutrition and exercise, and how the body responds.  She has focused on biokinetics and exercise as one ages, and completed her Masters in this subject at the age of 50. Then the third sister, Jane, decided she wasn’t going to be left out so she started training with Mrs Wendy Ray, swimming in Camps Bay in Cape Town and is doing very well despite not training for swimming since her UCT days.  She is very fit though, even completing the Argus at the age of 70!

What women can achieve

We asked Sue about her goal for the Championships.  “I would love to be in the top three for my events, but definitely hope for top ten medals.   The top 10 swimmers in every category win a medal.  Top ten times each year are available on the internet so I am aware of the times, but not of who will be participating.” Sue has a greater chance of winning a medal, she says, as she is in an older age category, where there is less competition – her sisters will experience a greater challenge!

Sue shared a message for women in particular.  “I am so lucky to have been born a woman – I have avoided the fighting in the marketplace and the

testosterone to get to the top!  Women are extra-ordinarily brave.  My father wanted me to be an engineer, but you must go where your heart is – I loved business. When I returned from Harvard, I joined the IDC (Industrial Development Corporation) at the same time as two men – I was 22 and they were in their late twenties. I knew more about the job than they, but I earned half their salary. This did not bother me as I had already adopted an attitude that recognised that they would probably have this career for the rest of their lives; I, on the other hand, could look forward to a varied life:  marriage, children, and opportunities yet to be discovered.”

Sue and her sisters, Jane Hulley and Anne Jones flew to Montreal on 31 July.  They participated in the all freestyle, 800m, 400m, 200m, 100m and 50m events.  At the time of writing this article, we were awaiting news of their achievements!  As we celebrate women and all they bring to our world, we wish these amazing sisters even greater triumphs going forward!