And She’s on the Road Again

This was not the original plan. From the outset I was going to get this whole travelling malarkey out of my system 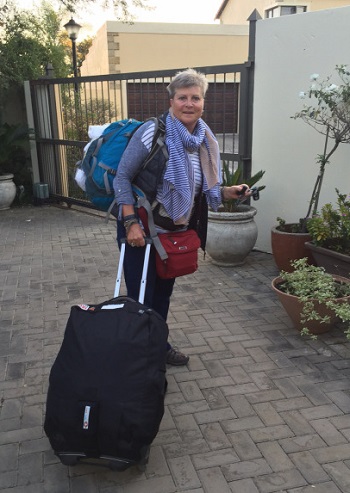 before my 60th birthday and I did give it some thought whether after extending the first leg of my adventures to the East by 2 months I could make a whistle stop visit home and attend my god daughter’s wedding, visit with the aged mother and then flit off to the great continent to our left for the last three months preceding the daunting 6 – Oh at end of March. And then I had an epiphany standing under a hot morning shower (yes, I do a lot of mulling while showering) and the long and the short of it is that I came to the realization that life does not end at 60 and why rush a good thing. So here I am: sitting on a balmy São Paulo evening on the balcony of my little AirB&B room that I have rented from the delightful Egnaldo and Guilherme, sipping my 3rd Cerveja, listening to iPad music through my newly acquired Minion Bluetooth speakers and putting pen to paper once more after a 5 month literary break.

I cannot tell a lie; the butterflies ahead of this 6 month stint were no less than before my initial trip last year, and it did not help that I had heard all sorts of stories of drug muling, kidnapping, muggings and theft in South America. I even bought a very fancy “travel glove” to fit over my brand new Osprey wheelie bag with a secure combination lock which hopefully will deter any would-be thieves of trying to rob me of my belongings while I am on some or other bus trip through this continent.

But the minute I set foot on South American soil at the Guarulos Airport I realized I must have attained some travelling prowess, because I immediately decided I was going to test the local transport system, mainly because I did not want to spend 140 Brazilian Real (>R500) on a taxi. Yes, she’s also become become a penny-pincher! And I did it all with cool and calm adroitness.  I was directed to Terminal 2 where a friendly soul gave me a public transport map of São Paulo and told which bus to catch into the city and from there which metro would take me to
my final destination (I did know that my accommodation was close to the Ana Rosa metro station) and with that I hopped on to the first bus that had Airport Transport written in big letters on its outside. In hindsight, I think think there might have been a more direct bus, but I did manage to get into downtown São Paulo and with further help from kind locals I managed to find my way to Egnaldo and Guilherme who greeted me with a big hug like a long lost friend. At no stage did I feel intimidated or scared and the friendliness and caring of the locals here truly overwhelmed me.

My host Guilherme, a young student, has kindly offered to show me some of the São Paulo sights over the weekend so seeing that “flexibility” is my middle name I have decided to only depart for Rio de Janeiro on Monday and see whether there is maybe more to this city than what everyone else has told me.