A Gringo in Rio

As I drove from Copacabana through downtown Rio on my way to the Aeroporto Galeao yesterday morning I realized that during my six day stay I really only managed to scratch the surface of this vibrant and breathtakingly beautiful city. Sure, I looked down on to the metropolis from both Pao de Acucar and Corcovado with the impressive Christo Redentor, I walked the promenades of Cocacabana and Ipanema, ambled through the heart of the city and sipped ample caipirinhas in pulsating Lapa, but how I wish I could have latched on to a Carioca, the term used for a native inhabitant of Rio de Janeiro, and had him or her reveal the true heart of Rio to me. 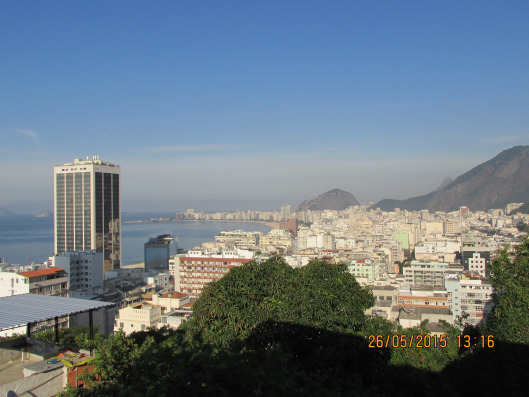 Trying to make my worthless Rand stretch as far as possible I was determined to avoid pricy hotels and taxis and thus have been spending much wifi time searching for affordable accommodation and accessible local transport. I downloaded the AirB&B app on my iPad and was astounded at how many people have registered rooms of varying descriptions to rent on this site. I have to make peace with the fact that I will probably never again travel as cheaply as I did in the East, so settled for a room for 470ZAR inclusive of breakfast at a place that boasted 100% best view of Copa. AirB&B encourages communication with your host, so I asked Thiago which bus would take me from the Rodoviaria (bus terminal for us nao falam ingles) to his establishment, and was told that would be the 190, and with further help from googleMaps I had a fair idea of where I was heading. Of course I never took into account that my bus trip across town would coincide with rush hour traffic, so by the time I eventually made it to Copacabana it was two hours later and pitch dark. The young lass sitting next to me on the bus took pity on me when I showed her my address, and she spouted forth in rapid fire Portuguese, and said something to the effect: “do you realize that it is very steep where you are going, and are you going to shlepp that heavy looking wheelie bag up there?? And as luck would have it I am going up that steep hill myself and please follow me”. It seems that no one walks up these hills, but gets into a little VW combi bus conveniently waiting for passengers  at the bottom, pays 2,5B$, and once it is filled to capacity you set off up the hill and get dropped off at the closest point to your abode. By this stage I also realized that I was actually in one of the many favelas, all perched picturesquely on the steepest Rio hillsides. My address was on the Ladeira Ary Barossa, and had I understood some Portuguese I would have known that Ladeira means slope. But where exactly on this Ladeira my 100% Best View of Copa was, as anyone’s guess. After a lot of conflabbing it was decided to drop me off at the  Babylonia Hostel, surely that was where I must be staying. No, that was not my destination, but they were kind enough to phone the number I had written down and a few minutes later I was collected by Vera, my AirB&B hostess who wheeled my bag up another 200 meters or so on a busy narrow walkway and finally I got to see the sparkling lights of Copacabana and the bay beyond. It truely was worth it.

Waking up to this breathtaking sight with a cup of the best Brazilian coffee each morning was surely good for the soul.On day 2 in Rio I joined the Free Walking Tour of Downtown Rio which suited my penny-pinching pocket and had the great fortune of meeting two wonderful young people from Bogota, Colombia, Nicolas and Kelly, who I spent a boozy Caipirinha filled evening with and added to my ever growing family of adopted children from all over the world. I have no doubt they were sincere when they invited to entertain me once my travels took me to their stomping ground.

Ever the Tommy-Tourist, but while sitting peacefully on one of the busy streets of Copacabana sipping the obligatory 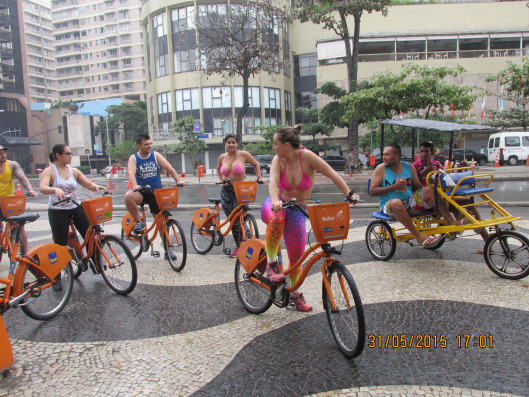 caipirinha I had time to reflect on the relevance of traveling solo. I mentioned it in one of my earlier blogs while I was traveling through India that I feel forever the observer. You become much more in tune with your surroundings and pick up nuances of daily life that you might easily miss when you are with another person. So it is that you marvel at the multi-cultural community living in this sprawling city where the dress de regueur is board shorts and tee shirts for men, and it is not uncommon to see them entering an eating place only clad in a speedo, spandex rules with women and if you are not wearing trainers it would have to be havaianas.

Staying in the favela of Babylonia also gave me a bit of insight in how the other half lives. The first favelas were created by returning soldiers that had nowhere to live at the end of the 19th century and were then of course joined by the hordes of freed slaves. Favelas are by no means restricted to Rio de Janeiro, but similar to Johannesburg’s Soweto and Alexandra they attracted the most attention. They are certainly slum areas but can by no means compare to the absolute squalor of the Mumbai slums or our own squatter camps in South Africa. What I knew of favelas before I came here had mainly to do with the rampant drug trading prevalent in these areas and that of course it was too dangerous an area to enter. I only managed to get a tiny glimpse of life in the favelas, but let me tell you, real people live there. There is a very visible police presence called the Police Pacification Unit and we in South Africa could learn something from their waste management programs. At no time did I ever feel unsafe even when getting home  well after dark. 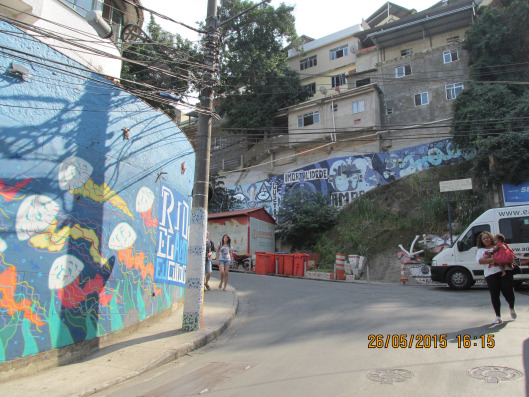 And of course I would walk down the hill in the morning but at the end of a busy tommy-tourist day I  would walk as far as the motorbike taxi rank and ask one of the young drivers to take me up to Thiago’s. On the first day I still attempted my bargaining prowess learnt on the streets of Bangkok but no! It will cost you 3B$, take it or leave it!

I have bought myself a little Portuguese phrase book and have mastered the art of hello, goodbye, please and thank you and hopefully by the end of my Brazilian sojourn I will have added some more pearls to my vocabulary, but I can only repeat it again Eu amo a Brazil!! And that is straight from GoogleTranslate!